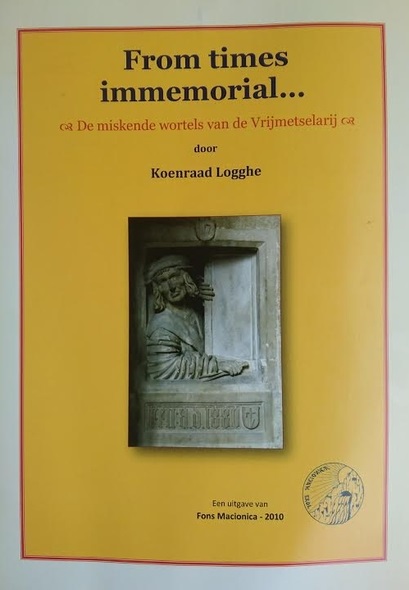 There is this Flemish Freemason, who writes about Freemasonry and heathenry. There is a problem though. His books are not for the general public…

In his public books such as De Graal (1997) and in articles and lectures that found their way to the internet, he sometimes refers to the Northern European roots of Freemasonry, but in 2010 he published a book solely dedicated to the subject: From Times Immemorial, de miskende wortels van de Vrijmetselarij. This book is published privately and only sold to regular Freemasons. Also, just as most of his writings, the book is in Dutch (sometimes he publishes in French). For many years I have hoped to bump into this book, since it looks as if it contains a wealth of information about our subject. So far, no luck.

When looking for the book, I usually end up at the “folder” on a website called “Docslide”. This used to be a PDF with the cover, the text on the back and a table of contents. When I visit that ‘folder’ now, the PDF is gone and the text can be read in a text field. That -of course-, makes it possible to copy the text, so I decided to translate that text so you too can have an idea of what the book is about.

The research into the origin of a complex phenomenon such as Freemasonry requires much courage and perseverance: courage to leave the common paths and to return to the sources themselves; Perseverance to tirelessly dig, even in places that are not so obvious or that are principally avoided by some investigators.

With From times immemorial, we use ancient sources to interpret symbols and usuages, and influences from historical currents, to attempt to follow the steady transformation of the Brotherhood. All of this is done in principally from an intercontextual perspective which sometimes gives illuminating viewpoints.

Our journey follows the winding path, from the old Norse mystery bonds, the so-called gildi, which in Christian times transform into warrior guilds and later into crafts guilds. These Brotherhoods will lay the foundation for the deployment of powerful cities. We must not lose sight of their role in religious processions and mystery plays. With the instruction within the building order and the chapter schools, a number of parallel initiation traditions develop: these of the bursarii, vaganti and golliaarden. Meanwhile brave knights follow the path to the Christian mystery center, Jerusalem. In the wake of the Knights Templar, builders also attracts travel there. The confrontation with the Middle Eastern culture jumpstarts  the epic narrative tradition. In the courts, histories about chevaliers errants are circulating and the quest for the Holy Grail is initiated. The dissemination of these stories is mainly the work of the trouvère or minnesänger [troubadours]. The Fidele d’Amore connect rose and cross with the Knight Templar. Thus the mystery lines lace up. With the appearance of the Rosicrucian manifests in the 17th century, Freemasons, members of the Royal Society, and Rosicrucians were named in one breath. What do they have in common? This is the fascinating course that must provide insight into the structure, rules and rituals of the Freemasonry.

The table of content is massive. Probably there is no index, but also this will give you an idea of the content of the book.

The various types of guilds; About the Building Guilds; The traditional concept ‘craft’; Misconceptions about the operative builders; Resumé;

Specific characteristics of building guilds; The word Lodge; Old and respectable; The Grand Lodge; The word Freemason; The Master of Construction; The Worshipfull Master; The pallirer; No bondman; A man of honor, good name and fame; The filiation; The Landmarks; The rights and duties within the Lodge; Charity; Circle and square; The dimensions of the Lodge; The cornerstone; The degrees; The prayer; Initiation and Raising; The qualifications; The women; Under the open sky; The three smaller lights; The all-seeing eye; Hill and valley;  The meetings; The morning talks; Time of sessions; The mosaic floor; The knotted cord around the tableau [tracing board]; The columns; Thor’s jewels; The movable and immovable jewels; The three windows; The North; The symbols of the Law; Stopping profane conversations; Are the builders satisfied; The word salvation (hail, heilagr); The secret; The punishment; The clothes; The shoe; Brothers in one big family; Wearing weapons; The greeting; The oath; The kiss; The knocks; The handclap; The numbers; The three points ∴ ; The steps; The three pillars; Circumulation or roundabout; The journeys; The test; The cry; The drink or toast; The three drinks; The mallet; The staff; The blue degrees; The materials; Compas and square; Light and fire; The water; The relics; The Rose; The marks; The St. John’s Fire;

Promotion to Fellowcraft; The Flaming Star; The letter G; Crossing a river; The winding stairs; The sign of the second degree;

The raising to the Master’s degree; The enigma of the third degree; Older more important versions; Mystery plays in the Middle Ages; The grave of Hiram Abiff; The steps over the grave of Hiram; The myth of Hiram in relation to the ritual; The contract with the devil; The widow’s son; The five points of fellowship; The Scottish Master and Andreas-Knight;

Influences back and forth; The Benedictine Order; The regula; The Burschenschaften;  Christianity and monastic orders; The universitas general; Deposit cornum; Further progress of the full membership; The Mensur; Other traditions; The table lodge;
The stories around the Grail;  Parzival – der reine Tor; Parizval – the Knight in becoming; The quest of the Grail; Knighthood and Temple Knights; Nordic warriors brotherhoods; The Persian fravašis; Knightship; The spiritual legacy of the Knights Templar; The name Melkitsedek; King of Salem; The consummation of the mystical marriage; Christ and Solomon; Resume;
The Hermetic Tradition; Ars memoriae; Hermes: reviled and glorified; The grave: The true temple of Gnosis; Quotes for illustration;
The Rosicrucians; Influence or not; The essence of the Rosicrucianity; Rosicrucianity before the Rosicrucians; The Rosicrucian writings; Individuals who brought spiritual humus; A higher degree of Masonry; The Masonic grade of Rose-Croix; An alchemical Rosicrucian ritual;

Now that is a list of subjects that (supposedly) have Masonic and heathen connections, right? It is not for nothing that the book is almost 500 pages on A4 format!

It is quite ironic that there are publications about this subject, but only in Dutch and Norwegian. When will an English-writing author pick up the subject?