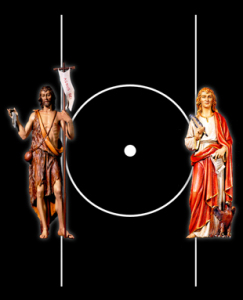 Another month and there will be another summer solstice. The day will be at its longest. Freemasons celebrate the longest day and longest night (winter solstice). There are several names for these festivities. Summer and Winter Solstice, but other lodges refer to the two saints John, John the Evangelist and John the Baptist.

The official festive days of the two saints John are not on the solstices. Saint John’s birthday is commemorated on June 24th, at the brightest time of the year, since he announced the coming of Christ, the Light.
Saint John the Evangelist is celebrated on December 27th, also the day of his supposed birth.

Both saints John are patrons of Freemasonry and the remembrances of their births are of easy use for the light /sun symbolism in Freemasonry. It is usually not the Catholic festive days that are ‘held Masonically’ (at least, not in Europe), but the course of the sun. In a Saint John’s celebration there may have both references to the sun and to the life of either John.

Of course in prechristian times, the solstices were also big events. The year started with the winter solstice and the other season (two seasons were enough in these days) started with the summer solstice. Both are major events in the cycle of the sun were celebrated massively.

Nowadays these days are near the start of summer and the start of winter. It is not unlikely that Christianity purposely did not want to choose the solstices for the dates to commemorate the saints John, because the link to what came before would be too obvious.

Before I was initiated into Freemasonry, I celebrated Summer Solstice and Yule with different groups. One group’s Summer Solstice weekend included a game in which a cock (representing the sun) had to be thrown off a pole, a reference to the start of the ‘dark part of the year’. The sun ‘falls down’, the days get shorter.
Yule has long been a popular ‘Asatru’ celebration. It is a celebration of the return of the light, the days get longer again.

In Freemasonry the solstices / Saint John celebrations are usually kept in the same weekends as the heathen festivities. The most important thing to me is that I consciously experience the course of the year, the changing seasons. Doing that ritualistically takes me out of the daily “profane” routine. Both celebrations (heathen and Masonic) have their pros and cons compared to each other. I have not yet been able to combine both around the same date. The Masonic events have received my preference in the last few years. A new organisation, ‘real membership’, I still do not know everybody  and a Saint John is usually a fairly big get-together, so I good place to correct that. Time will tell if at some point my preference will again go to the heathen celebrations or not or perhaps when I no longer want / need to try to go to two or three Masonic celebrations, better opportunities to combine them will rise again. The coming solstice I will again experience with at least to Saints John and no heathen solstice.